The boys are getting way too smart for me. It's amazing how their critical thinking skills are developing. Yesterday, we were at church, and I had to leave them alone in the nursery while I was practicing with Bro. Bryan and Mrs. Barbara. Karissa hollered at me to come the nursery to come see what my genius sons were doing. I walked up to the door, and they had pushed chairs against the half door. Karissa said that when she walked up, Titus was trying to push Peter over the door to get out. He was almost all the way over the door. If their plan had worked, two things would have happened. First: There would have been lots of crying because Peter would have been hurt. Second: There would have been lots of crying because Titus would have realized that he was by himself without anyone to push him over. A line from Meet the Robinsons comes to mind, "I don't think this plan was very well thought out." I guess I won't be leaving them in the nursery by themselves any more.

During this visit at church, they also came up with a new way to sit in the toddler chairs. 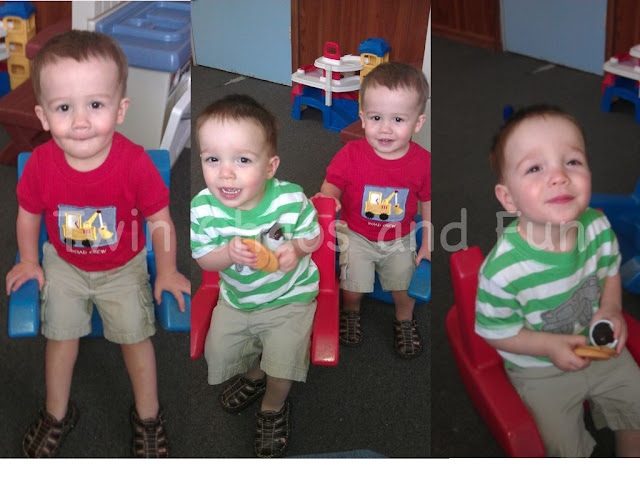 Everyday, I'm blown away by what they're picking up. They are no longer my babies that I have to do everything for.
Posted by Stephanie at 11:08 AM

Email ThisBlogThis!Share to TwitterShare to FacebookShare to Pinterest
Labels: twins, working together