The day after the boys started crawling, I bought a baby gate to put in the hallway that leads from the living room to the kitchen. I was trying to cook and was a nervous wreck because they kept getting under foot. I kept picturing myself knocking the pot of boiling grease off the stove right onto them. Very few things really freak me out even as a mom, but them being in the kitchen while I cooked really freaked me out. But I took care of that problem:)

Now, I knew that once they started walking and pulling up on things that the baby gate would become a new challenge for them. Well, today was the day. They both decided to see how far up they could each get. Titus made it the farthest. He made it all the way to the top and was hanging halfway over before I realized what he was doing. Now, I have to add not climbing the baby gate and staying out of the kitchen to the list of things that we're training them not to do.

Sometimes I feel as if I'm referring to dogs when I say that I'm training them. But that's what I'm doing, and there's no other way to say it. They're beginning to learn that life is about actions and consequences, whether they're good or bad actions. If they climb the baby gate (a bad action), there will be a consequence to follow, one they won't like. However, if they listen and obey (a good action), there will be a different kind of consequence, one they will like. If I don't train them now, they'll find it harder to understand life. They'll have to learn everything the hard way: that a hot stove is a bad idea and that cleaning chemicals can be deadly.
Posted by Stephanie at 12:31 AM 1 comment:

If My Head Weren't Attached!

If my head weren't attached, I think I'd forget where I put it. I can't remember anything lately. When the boys are awake, I don't have time to remember to do things; and when they're napping, I'm too tired to remember to do things other than laundry and dishes. So, blogging has once again taken a back seat to life. Which means, I have some catching up to do:)

The boys 15 month well check up was last week. Peter weighed 20 pounds, 14 ounces and was 30.5 inches tall. Titus weighed 23 pounds, 14 ounces and was 31 inches tall. The 3 pound difference sure feels like more!! Peter's finally gaining weight which is good, but he also hit a growth spurt. His toes started poking out of his 12 month sleepers last week; so, I had to buy new sleepers. He kind of looked like Red Skelton's "Freddy the Freeloader" character (if you know who he is) with his toesies sticking out:)

They're "running" now and tackling each other. Actually, it's more Titus tackling Peter and laughing hysterically while Peter fusses. Then, they roll around of the floor for a while. It's exciting seeing their imaginations develop. Sticks have now become wonderful outside toys with endless possibilities, and dirt has now become their best friend. Fortunately, they haven't discovered how to put anything in their pockets yet; so, the laundry is safe for a little while longer:)

They also recognize people now and have their favorite's at church. Peter absolutely loves Breauna and Dani at church, and Titus's favorite person is Aunt Karissa. There are two exceptions for them though; if Pa or Uncle Stephen come in the room, they both switch places.

I think that covers everything, but I'll definitely be blogging more often again. Here's an updated picture too. 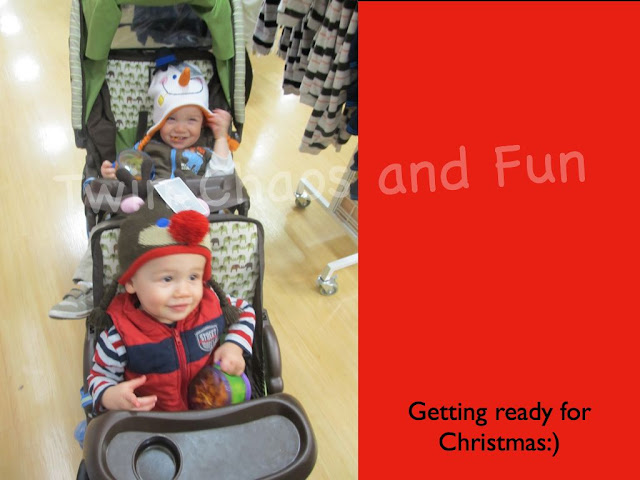