It's been a while since I've updated everyone on the goings on of the Slavy household, and it's time to play "Catch Up." Thanksgiving, Christmas, and New Years were such a whirlwind, and I really don't know where the holidays went.

We spent Thanksgiving at Nana's house (Dan's mom). Last year, the boys just kind of tasted mashed potatoes and yams; but this year, they got to really eat their 1st Thanksgiving dinner. You should have seen them stuff the food in their mouths. Titus especially loved the food. 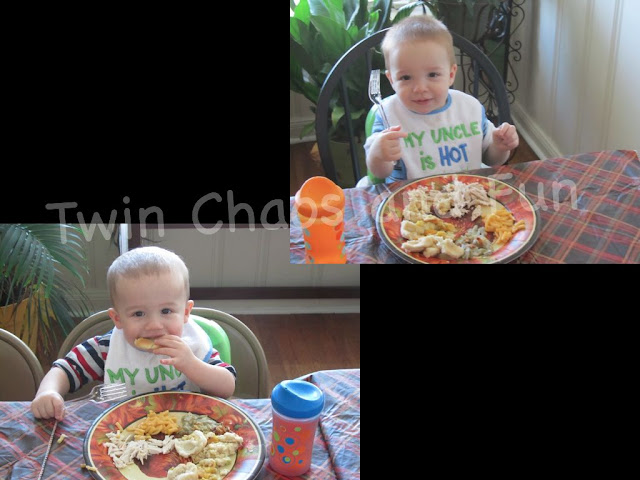 And yes, they're using big boy forks instead of toddler forks. They find it easier to use the big forks without accidentally throwing the food.

Christmas was a blast this year with the boys. They knew what presents were and absolutely loved opening them. Their favorite toys that they received was a drum that had a recorder, tambourine, maracas, and drum sticks inside it and also their keyboards. The boys love music and instruments. There's nothing more adorable than listening to them play and sing on their keyboards. I see piano lessons in their future:)

What blows me away is how much of an imagination they already have!! Well, they absolutely love the microphones at church; and since getting the maracas for Christmas, they've started pretending that the maracas are microphones. What 18 month old knows how to pretend that maracas are microphones?!?! I certainly didn't teach them. The other day, Peter was even singing and dancing while pretending that the maraca was a microphone. Go figure!! I can't wait to see what the future holds if their imaginations are already that good.

We did manage to get some Christmas photos taken; and now, I'm managing to upload some for you all:) 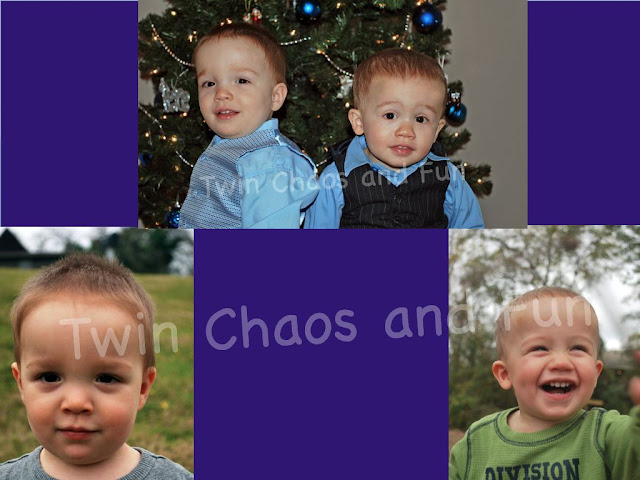 Peter has developed quite the personality and temper over the past 2 months. Who knew that my laid back Peter would have such a temper! While having a temper is a problem, the worst part is that you never know where the line is for his temper. He's easy going 80% of the time; but when you cross the 81% mark, a whole new Peter emerges. However, during his easy going mood, he'll lay on your shoulder for 15 minutes giving you a hug, or he'll randomly jump up on you and give you a hug and a kiss. He still sits back and watches what's going on; he doesn't want to get hurt doing something the wrong way when he can do it the right way on the first try. He's also started trying to talk. It's still jabbering, but he's trying now.

Titus is definitely a mama's boy, but that's okay with me. He'll eventually grow out of it, and I'll miss it. He's still either really happy or really sad, no easy going times for Titus. He's headstrong and just plows through obstacles not thinking about the outcome which is why he constantly has new bruises popping up. He's also my motor mouth, and it won't be long before he's forming actual words. He'll carry on a conversation with me all in jabber, but I know he's answering my questions and asking me questions. He just can't quite form the words correctly. Drum roll please for the best news.............................he tells me when he has dirty diapers!!!!!!! I really don't think it will be long before he's ready to potty train. YAY!! The other day, he looked at me, squated, and told me (in jabber) that he was pooping. Then, he stood up, came over to me, and jabbered while pointing to his diaper. He was informing me that he needed a new diaper.

Life is certainly going to be interesting over the next month since Stephen and Karissa's wedding is coming up. Peter and Titus are supposed to be ringbearers; so, we'll see how that goes. I've started taking them into the night services at church to try to get them used to being in there when it's time for the wedding. Pray it all goes well for Stephen and Karissa's sake.

Well, I think I've caught up on all the important things going on. I just really didn't think it had been that long since I last blogged until I looked at the date of my last post. Time really does fly!!
Posted by Stephanie at 1:17 AM 1 comment: